The History of Timber Flooring 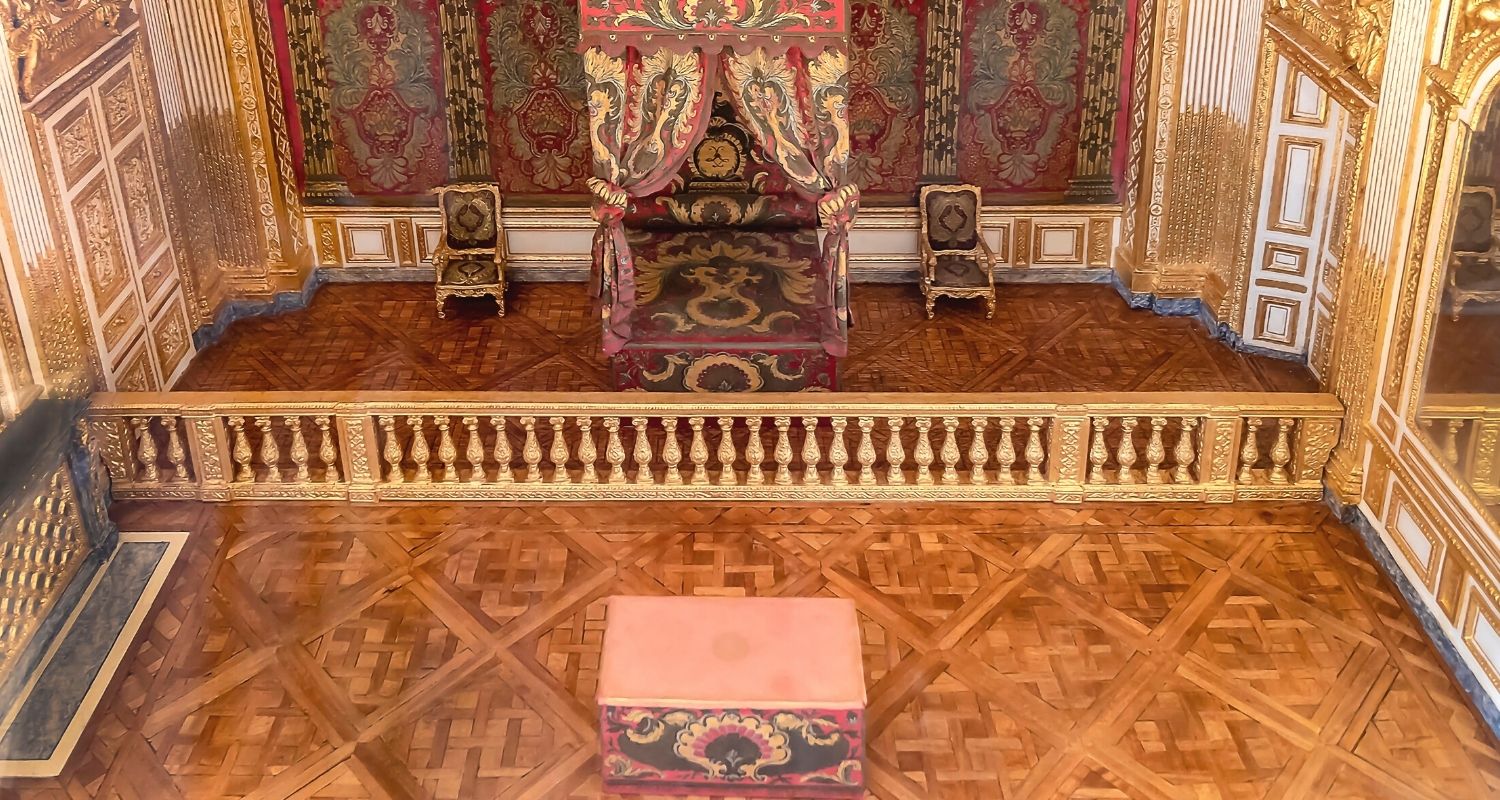 Timber floors are one of the most sought-after features in today’s property market. Floorboards reflect sophistication, tradition, and quality, making them a favourite flooring option for many architects, flooring specialists and builders.

Wood flooring brochures from the 1800s 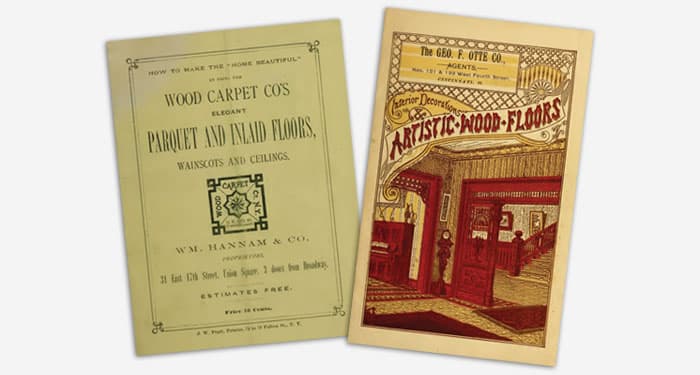 The Origins of Timber Flooring

Before timber was used in the home, floors were crafted from packed earth, stone or brick. When timber started to be used, in the Middle Ages, unrefined and raw timber was used for houses. Density and hardness were considered important characteristics, as they meant a more reliable and sturdy structure. Hardwoods including ash, oak and maple were used to build structures that required particular durability.

Timber flooring was considered a luxury and was only used in homes that housed the wealthy. Royalty were the first to enjoy the comforts of wood floors, but they were not like the uniform, polished versions we are used to seeing today. The first floorboards were hand-hewn and irregular in length. Workers would use hand tools to scrape the flooring smooth before bringing in handfuls of sand that they would rub on the floors.

The 1875 painting (below) by French artist Gustave Caillebotte depicts working-class men hand scraping a hardwood floor in his apartment in Paris.

The earliest wooden floors were not finished. They were worn down to a sheen by constant foot traffic. Gradually methods of finishing the floors became popular, including wax, paint, shellac, varnish, and eventually polyurethane. 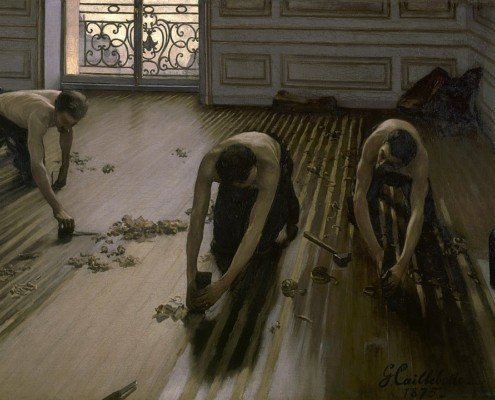 Parquetry is a geometric block pattern flooring style that flourished during the 18th century. One of the defining moments for these uniquely patterned floorboards came during the late 16th century when Parquet de Versailles – a specific parquetry pattern – became the standard flooring for the formal rooms in French chateaux. It was a welcome alternative to marble floors due to its ease of maintenance, durability and flexibility of design options. Commissioned by the aristocracy, mansions and palaces throughout Europe featured elaborate parquetry designs.

The main image (at the top of this article) is a photograph of the Palace of Versailles in France, which kicked off parquetry’s popularity in Europe.

Today, parquetry is still a popular choice when it comes to wooden flooring. It has a traditional, high-end look, and is easy to clean and maintain. It can be crafted in a variety of timbers including spotted gum, tallowwood, blackbutt and more, each offering its own unique tones and grains.

The History of Timber Flooring in Australia

As Australia is relatively young, its timber flooring history is also young. The Australian forest industry has evolved dramatically over the past hundred years. Today, the industry uses the latest technology to ensure the environment is looked after while supplying quality timber to businesses like ours and ultimately, homes like yours.

Spotted Gum, Blackbutt, Tasmanian Oak and Jarrah are some of Australia’s most popular types of timber for flooring, each with their own distinctive textures, undertones and finishes. Solid timber floors last for many years after they are laid, which is why many old buildings in Australia still proudly feature their original wooden floor.

As technology has developed, so have the number of flooring options available in Australia. Engineered solutions have entered the market, providing people with more cost-effective and efficient options for their floorboards. Engineered timber flooring offers simple installation and requires no sanding, staining or sealing. Back to Timber offers many solid wood and engineered timber flooring options that both look good and have the insulating properties of timber. 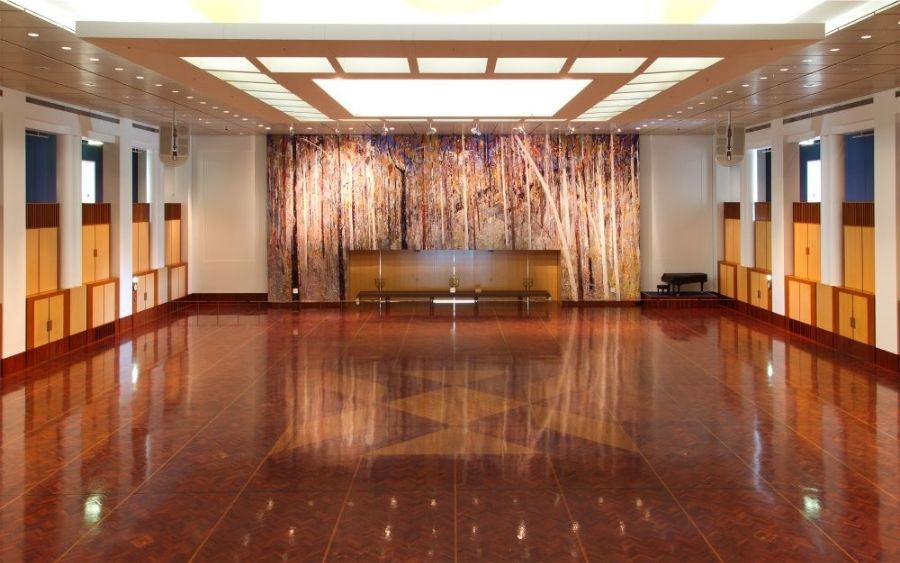 Where to Next for Timber Floorboards?

From parquetry designs that are centuries old to new engineered timber floors, there is no doubt timber flooring has evolved significantly over time. No matter which flooring option you choose, the outcome is bound to add warmth and value to your home or commercial space.

If you’re new to timber flooring and need some guidance, Back to Timber has one of Sydney’s widest range of flooring options. Feel free to contact us or pop into one of our flooring showrooms.

Want to join the discussion?
Feel free to contribute!